Back to Black: Richard Meier & Partners Departs From Its Signature White Palette With a Black Glass Tower for New York

Richard Meier and Partners has released renderings for its 42-story residential tower in New York City. Situated on the East River just below the United Nations, 685 First Avenue will be the firm’s tallest New York structure to date. Proposed as a residential building, the tower will include 556 rental apartments along with a range of amenities such as a pool, a fitness center and a children’s playroom. The building will also accommodate retail space at its base, hoping to spur urban engagement.

Composed of a series of black metal panels and a black glass curtain wall, the building also heralds a new aesthetic direction for the firm, departing from its signature white palette. The residential apartments have been configured to maximize window space for each tenant, providing floor-to-ceiling panoramic views of the East River and Brooklyn beyond. Read more from the architects about the plans for 685 First Avenue: 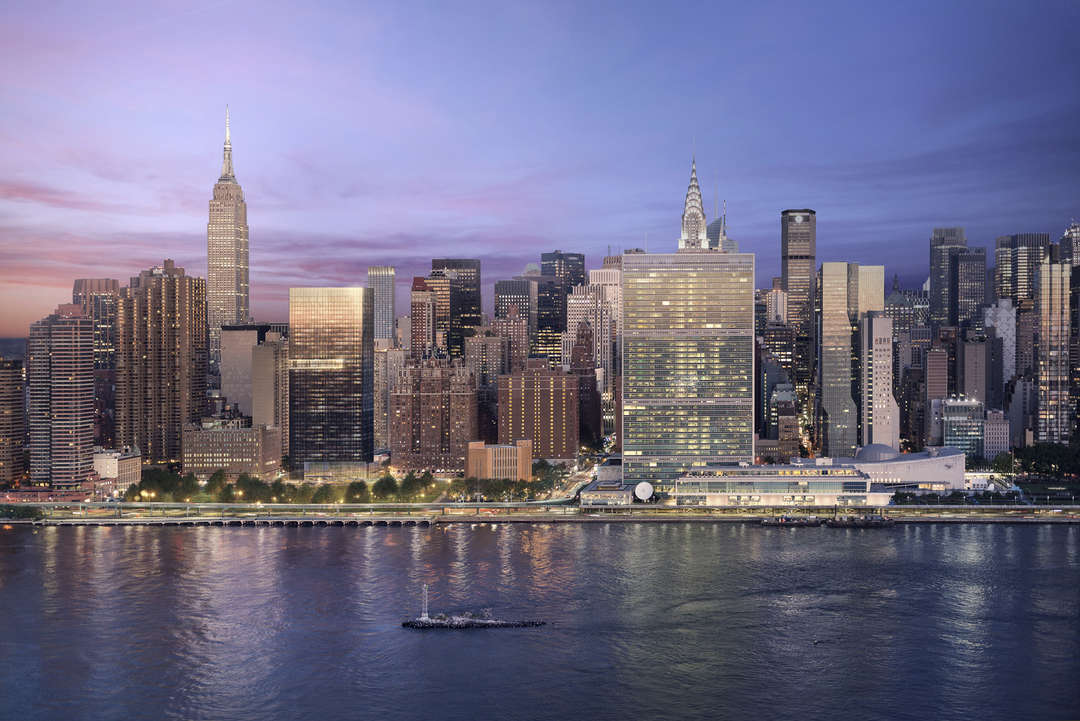 The 42-story, 460-foot-high residential tower, Meier’s tallest in New York City, will rise just south of the United Nations Headquarters in Manhattan overlooking the East River. The 685 First Avenue site occupies a 32,365 SF parcel between East 39th and East 40th Streets along the West side of First Avenue. It will be home to 556 rental and condominium apartments and feature panoramic views of the river and the city.

Minimalistic in form, the design of this predominantly glass building evidences great consideration for materiality, lightness, transparency and order. Its taut curtain wall is incised with modular subdivisions and articulated with selective metal panel elements in the form of balconies, canopies and corners. A distinguishing feature — an architectural cut-out at the 27th and 28th floors — will exist in dialogue with the building’s context and be visible from across the East River.

‘The black glass curtain wall is a departure from our trademark white palette,’ Yeon continues, ‘When this intriguing challenge was proposed by developer Sheldon Solow, we accepted it with great enthusiasm and curiosity. We approach all our designs thoughtfully and with an open mind, and with this project we have remained true to our fundamental principles—distinctiveness in scale, proportion, light and power. That is the legacy of our white and clear glass buildings, and the design of 685 First Avenue foregrounds and celebrates these same elements.’ 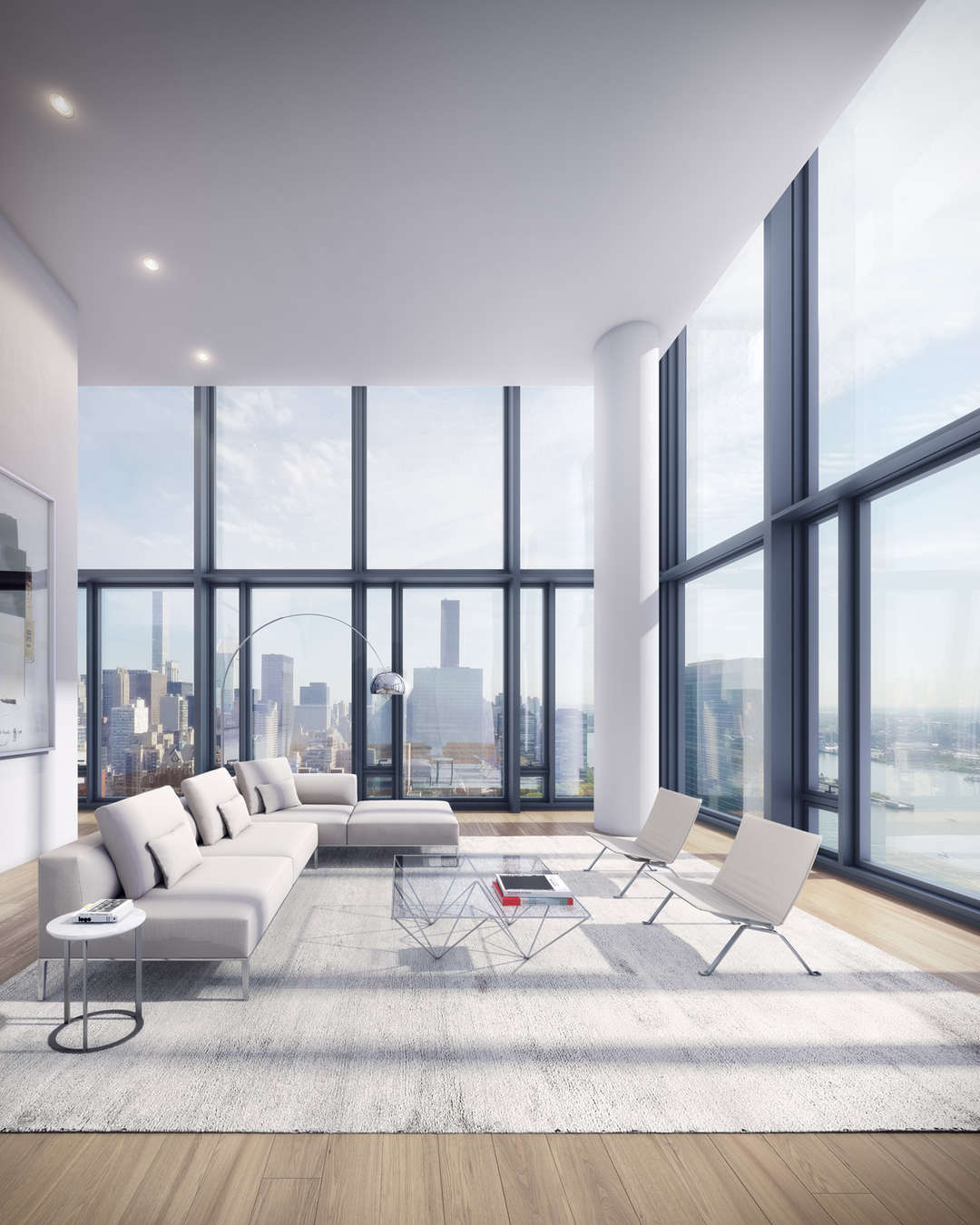 At street level, the project is designed to promote urban activity by providing retail space along First Avenue. The expansive glazing of the grand, double-height residential lobby has a direct visual and physical connection with the surrounding context, the future public park across First Avenue and the East River. The light colored materials rely on principles of light, order and geometry to create a modern and open space.

Residents of the tower’s 408 rental units and 148 condominiums will have access to distinctive amenities located on the second floor, including an indoor swimming pool, fitness center, children’s playroom, tablet/work room, game room, private dining room, and lounge. These amenities and public spaces come alive through a rich palette of colors and textures, and tactile materials. All living room and bedrooms in the building are configured to take advantage of the outstanding views. The light palette of the interiors—whites, grays and earth tones—complement the smooth and textured surfaces of wood, plaster and glass. 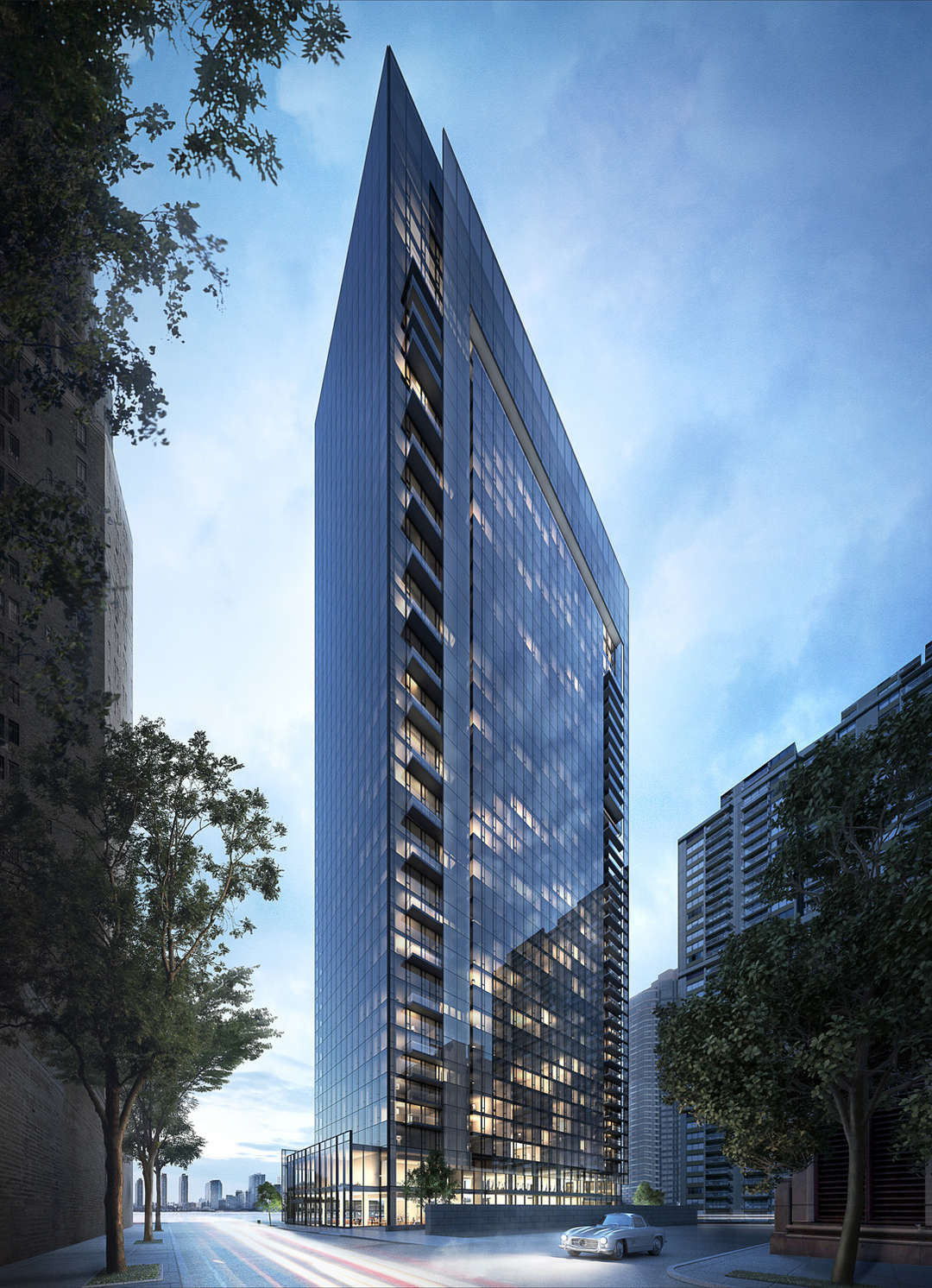 Richard Meier comments: ‘We asked ourselves, can formal ideas and the philosophy of lightness and transparency, the interplay of natural light and shadow with forms and spaces, be reinterpreted in the precise opposite – white being all colors and black the absence of color? Our perspective continues to evolve, but our intuition and intention remain the same – to make architecture that evokes passion and emotion, lifts the spirit, and is executed perfectly.

‘Having the opportunity to work with Sheldon Solow and his team on this project has enabled us to continue our contribution to the urban fabric of New York City. The singular form of 685 First Avenue is borne of a desire to create an iconic building unique to Midtown Manhattan. With advanced technologies and building materials, we seek an innovative and timeless design that adds to the history and roster of Manhattan’s landmark buildings. The architecture will be finely crafted, precise, elegant and striking. It is very meaningful to me personally to work in New York City, and to give something enduring to the city I call home,’ Meier continues. 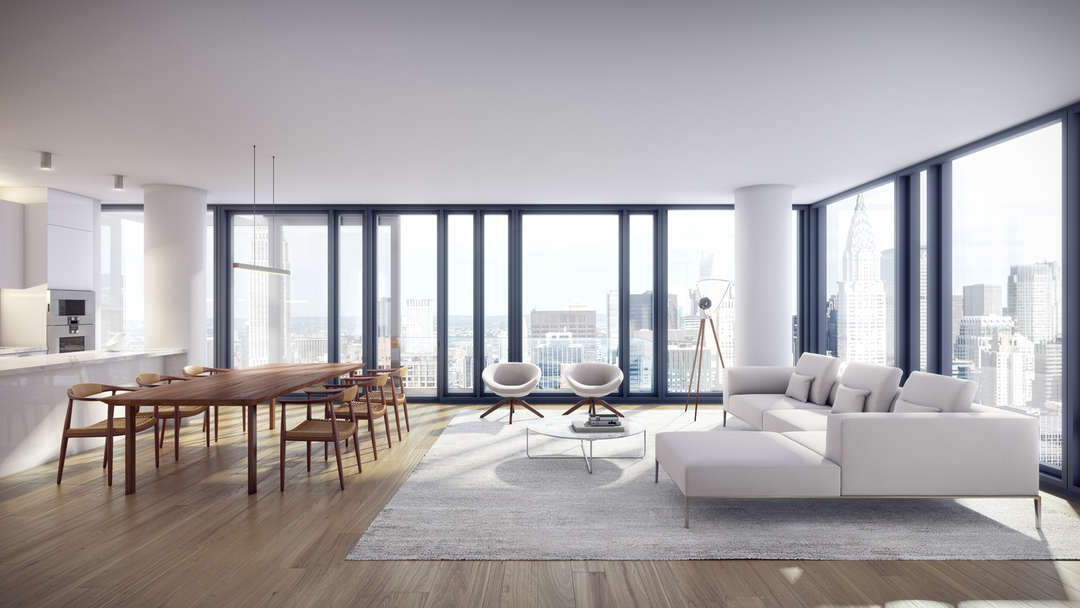 Window bays and modules are maximized in size to full floor-to-floor heights, altogether eliminating any horizontal or vertical shadow panels. Each module is subdivided further proportionally and geometrically into a system of operable window panels, joints and reveals, and mullion profiles that keep the façade open and elegant. The black glass unifies the façade, provides privacy for residents, and modulates the reflections of the context.

Sheldon Solow, developer of 685 First Avenue, comments: ‘I have known Richard for a long time and have always admired his work. I was thrilled when he agreed to lend his inimitable sensibility to this project. Richard and his team have truly created an inspired design that marries the streamlined look of the black glass with the interior brightness and transparency of a trademark Meier masterpiece. The result will be both a dramatic addition to the East River skyline and a fantastic place to live.’

Sheldon Solow has been a leader in New York City real estate since the 1970’s. His firm’s portfolio includes the Solow Building, a signature 50-story, 1.5 million square foot, black glass office tower at 9 West 57th Street, designed by SOM partner Gordon Bunshaft; as well as residential developments: One and Two Sutton Place North; One East River Place at 525 East 72nd Street; 265 East 66th Street, and the 10 Solow Townhouses designed by Eli Attia, also along East 66th Street. 685 First Avenue is the first building of a larger East River Development Plan approved by the City of New York in 2008 that allowed for creation of a new 9.7-acre mixed- use development with residences, commercial and public open space on a long-abandoned site in Manhattan long the East River.