The Southwest Indians’ Humpbacked Flute Player, commonly known by the Hopi word “Kokopelli,” usually appears on stone or ceramics or plaster as part of a galaxy of ancient characters and symbols. On a steep canyon wall above the Little Colorado river north of Springerville, Arizona, however, a Kokopelli pecked into a basaltic boulder appears in absolute isolation. 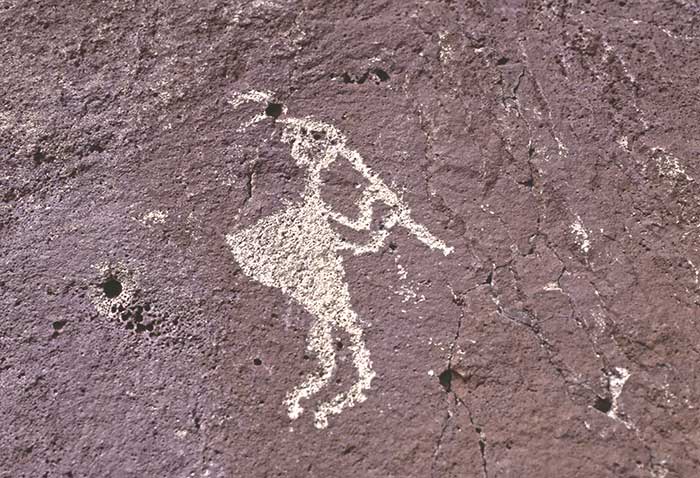 Against the black rock surface formed by primal forces, this strange and lonely figure, with its apparent mal-formed back and long flute, seems to drift through the infinite vastness of space, transcending time and place, sending his plaintive music across the universe. There is a sense of omnipresence, of the eternal. The early artist – probably a shaman, or medicine man, seeking an entranceway to the spirit world – may have understood a profound truth, and he may have intentionally used the surface to express the universality of that truth. Of course, he may have simply used the boulder’s surface as a convenient place to peck a Kokopelli figure.

There is no way to know with certainty what the artist had in mind, but his work can set your imagination churning.
Kokopelli has stirred imaginations for a long time. Of the lexicon of characters featured in the age-old religions, rituals, folk tales, ceramics, rock art and murals of Southwestern Indians, there are few more enduring than Kokopelli. He is so irresistibly charismatic that he had been reinvented time and again for well over 1000 years by southwestern artists, craftsmen and storytellers. The process continues to this day.
In the modern genre, he usually wears a kilt and sash and a feathered headdress. Back arced forward like a rainbow, he plays his ancient instrument. He dances solemnly. He graces paintings, sculptures, ceramics, jewelry, textiles and books in galleries and festivals in New Mexico, Arizona, Utah, Colorado and western Texas. He is an icon of the region.

In earlier times, Kokopelli was far more than an icon. There is, in fact, considerable evidence that he was an important deity to Southwestern Indians. His images are among the most widely distributed of any in the prehistoric and historic Indian sites of the Southwest. Kokopelli may have been as important to the Southwestern Indians as Abraham is to Jews or Paul, to Christians.

Ubiquitous as the figure is, the origins of Kokopelli as a deity and the evolution of his role in Southwestern Indian life are difficult if not impossible to reconstruct. It is like trying to assemble an immense and mysterious jigsaw puzzle made up of a jumble of a few distinguishable pieces, many indistinguishable pieces, innumerable missing pieces, and numerous possibly unrelated pieces.

In classic form, a silhouetted and sometimes phallic Kokopelli appears to either suffer a humped back or to carry a bulging pack. He plays his flute like a New Orleans jazz musician plays a clarinet. He may be depicted as walking to some now unknown destination, lying on his back, sitting with crossed legs, dancing to a prehistoric beat, making love to a woman, even perching on the head of another figure 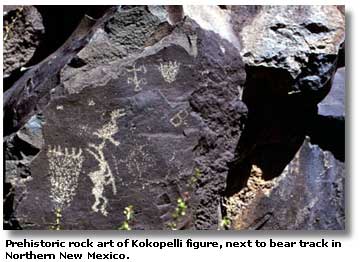 He appears in many forms. In Galisteo Basin rock art in New Mexico, for instance, he takes on the guise of a humpbacked rabbit. At Sand Island, Utah, he appears as a flute-playing mountain sheep. In rock art on West Mesa, near Albuquerque, Kokopelli wears a headdress, necklaces and a kilt. On rock art south of Holbrook, Arizona, he wears a kilt and sash. On a prehistoric bowl from the Zuni reservation, he appears as an insect, possibly the locust which led the Pueblo people’s mythological emergence from the underworld onto the surface of the earth. On rock art in the Arizona’s Petrified Forest and Canyon de Chelly and near Moab, Utah, Kokopelli turns up with a bird for a head.

He is also represented in many styles. Unmistakable Kokopelli images in rock art, for example, range from stick figures in Chaco Canyon to spare, abstract stylizations in Colorado’s San Canyon to simple outlines near Arizona’s Hardscrabble Wash to solid figures near Velarde, New Mexico. Elegant Kokopelli images painted on ceramics ten centuries ago by the Hohokam, a southern Arizona Pueblo culture, have become the prototype for modern portrayals. 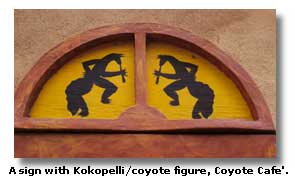 As indicated by his images, Kokopelli seems to have played a featured role in numerous defining moments of Southwestern Native American life. He leads processions of people, perhaps on migrations. He participates with costumed shaman figures in tribal rituals. He plays his flute for dances in tribal ceremonies. He joins with other figures to illustrate tribal myths. In hunting-magic scenes, he seeks to ensure success for men carrying bows and, sometimes, lances. He impregnates women. He participates in birthing scenes. Among ancient rain and water symbols, he plays his flute to plead for moisture sufficient for his tribe’s corn, beans and squash to grow.

On occasions, multiple Humpbacked Flute Players appear in a single scene, perhaps seeking to redouble chances for fertility and prosperity.

Kokopelli’s guises, styles and roles have mystified scholars for decades. They have prompted divergent lines of research, given rise to diverse theories, and led to some downright silly speculation. Yet another layer of mystery about Kokopelli’s origin and evolution lies in possible forerunners and derivatives.

One possible forerunner could have been simply flute players, lacking hump or phallus, such as those which appear in Canyon de Chelly rock art dating approximately 600 AD.

Another possible related figures includes a humpbacked, phallic figure which is shown carrying a staff rather than playing a flute. One such example was painted on a bowl fashioned by the Mimbres Indians of Southwestern New Mexico some 900 to 1000 years ago.

Yet another possible forerunner includes humpbacked, phallic figures which carry bows rather than play flutes. Such figures are painted on the wall of Fire Temple in Mesa Verde National Park in Southwestern Colorado.

One of the more elaborate figures which could be a Kokopelli-type derivative was pecked by an 18th century Navajo shaman into a canyon wall at a sacred site in Northwestern New Mexico’s Largo drainage system. Surrounded by other symbols chiseled into the rock, this regal figure stands on muscled legs, wears a headdress and decorated kilt, and is depicted holding a staff rather than playing a flute. He bears, not a hump, but rather a rainbow-outlined pack adorned with feathers and filled with seeds.

This site, like other rock art sites in the Largo Canyon complex, is still revered by traditional Navajos. Vandals have defaced it in some areas, an act akin to desecrating a church, a synagogue or a mosque.

The relationships, if any, between Kokopelli and those figures which feature only a hump or just a flute is not clear and may never be clear.

The pieces of the jigsaw puzzle which are available to us have produced endless and sometimes emotional conjecture about Kokopelli’s origin and meaning. 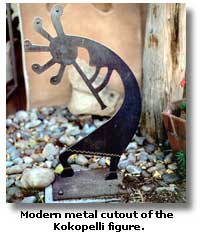 One possibility is that Kokopelli could have been an actual misshapen person who was widely venerated for his power and wisdom. He could have been a young man, burdened with a pack, traveling among pueblos, seeking a wife; he played his flute to announce his mission. He could be a great leader, like Moses, who guided his people in a migration to a new homeland. He could have been a pochteca, a early bearer of gifts from central Mexico.

One of the more exotic theories was mentioned by southwestern Colorado authority Michael Claypool during a discussion several years ago at Fort Lewis College in Durango, Colorado. He thinks that origins of the figure could eventually be traced all the way to Peru, where native traders carrying packs have long used flutes to announce their arrival at native villages. An archaeologist friend who has worked in Latin America tells me that Kokopelli-like figures are common icons in prehistoric sites of Southern Mexico and Central America.

While we may never know the origin or the full meaning of Kokopelli, it is clear that he held high importance as a deity in the arid American Southwest. His roles in scenes representing human reproduction, crop growth and water suggest that the Southwestern Indians associated him universally with fertility and prosperity. His roles in hunting scenes, processions, rituals and ceremonies suggest that the Indians connected him universally to their physical and spiritual well being.

It is clear, too that the magic of Kokopelli is enduring. A few summers ago, my wife and I came upon a dancing Kokopelli figure pecked high on the sandstone canyon wall above the Chaco Canyon ruin known as Kin Kletso. A thunderstorm rumbled threateningly overhead. You could almost hear a plaintive and simple melody in the wind as Kokopelli played his flute resolutely to plead for rain from the sky above and to encourage the growth of crops of a long-vanished people in the canyon bottom below.

There are many places to see Kokopelli figures in rock art. Examples include West Mesa, across the Rio Grande from Albuquerque; Canyon del Chelly, in northeastern Arizona; Chaco Canyon, in northwestern New Mexico; and above the Little Colorado River, near the Raven Site Ruin north of Springerville, Arizona. Kokopelli figures appear occasionally on Indian pottery in Southwestern Indian museums.

Dennis Slifer and James Duffield present the best overview of the Humpbacked Flute Player and locations in their book Kokopelli. Polly Schaafsma provides a good review of Southwestern rock art, with various reference to Kokopelli, in her book Indian Rock Art of the Southwest. Stephen W. Hill, author, and Robert B. Montoya, illustrator, give a brief overview combined with excellent Kokopelli-inspired illustrations in the book Kokopelli Ceremonies.

The Magic Of The Flute
Desert Music and The Composers