AccorHotels CEO Discussion : What It Takes to Succeed in the Competitive Hospitality Industry 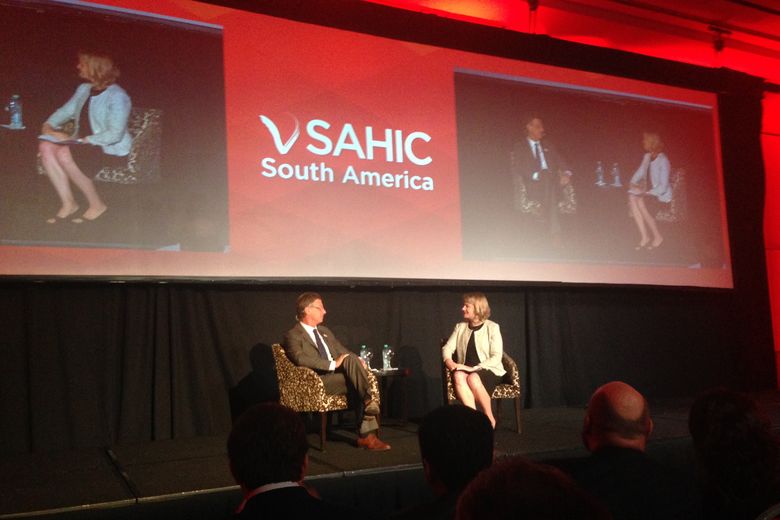 During the second day of the SAHIC South America event Thursday in Buenos Aires, AccorHotels CEO Sébastien Bazin detailed his thoughts about the importance of being able to anticipate change in an increasingly competitive hospitality industry and about what he sees for the future of the business.

Bazin, one of the most prominent figures in global hospitality, has headed Accor since 2013, guiding a company with more than 4,000 properties in nearly 100 countries spread throughout the planet. Under his leadership, Accor is one of the largest hotel operators on the planet. In a wide-spanning conversation rich with ideas and valuable insights, Bazin shared his thoughts with Stephanie Ricca, editor-in-chief of HotelNewsNow.

“In today’s world, either you change or you will be change,” Bazin said.

Throughout his years as leader of Accor, Bazin has placed a heavy focus creating a company that stands out and is first to move on new ideas, thinking with an eye towards being successful in the future. He described this as key to thriving in the hotel industry, which has been growing at a steady 4 to 5 percent clip in recent decades, which is great but also challenging because it draws so much competition to the space.

A major challenge facing large-scale hotel brands such as Accor in the modern industry is upstart concepts like AirBnB, a sharing economy web platform with a vast and increasingly number of listings across the globe. Bazin emphasized that AirBnB is not the enemy, but rather a company that provides valuable insight because they have understood something about consumers that traditional hospitality stakeholders have not.

Bazin said that the hotel industry needs to learn from AirBnB as well as from the customers themselves. The modern hotel guest does not want to be seen as a number, they want to be a unique individual and their hotel experiences should reflect this desire. On the whole, price is a less important element than it once was, with customers that are now willing to pay more if it means being transformed by experiences they want to remember, learn from and share with others.

When asked about what he sees as the future of the business, Bazin said that the hotel industry must prepare for the advent of artificial intelligence, describing a scenario in which computers make organic suggestions to would-be guests. He also said evolving online payment methods is something for brands to monitor.

“Anybody that is driven by size makes a mistake,” Bazin said. “I prefer to be driven by local market share.”

In terms of Argentina, the host country for this event, Bazin praised it as a hospitality destination for having a rich history and wonderful cities, but said the macroeconomy is a problem because land and labor are expensive while the price per room remains low. Another challenge facing the country in terms of attracting tourists is that it has a need for more visiting flights and airlines.

Overall, his advice for people who aspire to join the hospitality industry is change and learn, not staying with the same company for 20 years as people were once likely to do.

The following projects by AccorHotels are currently underway in Latin America:

More information about AccorHotels can be found onTOPHOTELPROJECTS, the specialized service provider in the exchange of cutting-edge information of hotel construction in the international hospitality industry.