Jeff Madalena and Jason Gnewikow are the sort of creative couple who seem to have numerous design projects going on at any given time (they describe themselves as “creatively restless”). When they set out to remodel their 1910 brownstone two years ago, they came up with a design of their own and hired an architect friend, Michael Almon, to sign off on the plans. Jeff, cofounder of New York–based clothing company Oak, and Jason, a partner at design studio Athletics, have a shared penchant for graphic drama (the two recently launched a fragrance line, Carlen Parfums, with branding that follows suit).

“We were seeking light and the illusion of exaggerated space,” on each of the brownstone’s four floors, they say. Other than some structural changes to the parlor floor—closing off a hallway for more square footage in the living room and a gut renovation of the kitchen—Jeff and Jason kept the brownstone mostly intact. Their first order of business? Whitewashing the walls and twice bleaching the parquet floors that were revealed when they ripped up the old carpet.

Photography by Poul Ober, courtesy of Jeff Madalena and Jason Gnewikow, except where noted. 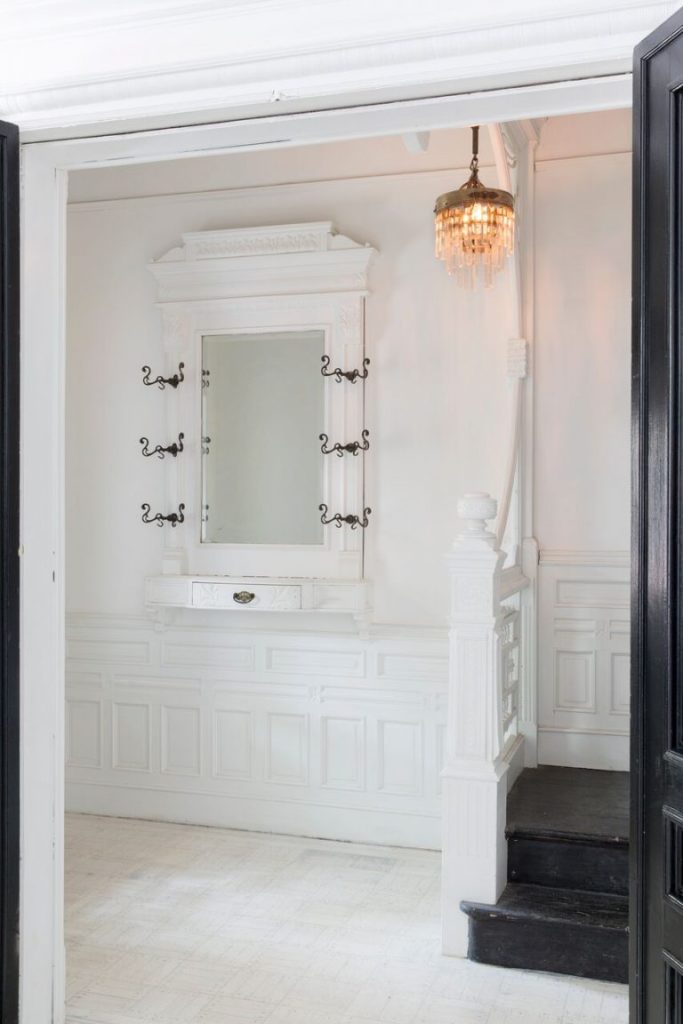 Above:  The couple painted the interiors a uniform shade of Benjamin Moore’s Super White. “For a space this size, changing paint color from room to room just tends to break the space up and make it feel smaller,” says Jeff. The floors were sanded, bleached, bleached again, finished with a transparent white stain, and sealed with a matte poly finish. 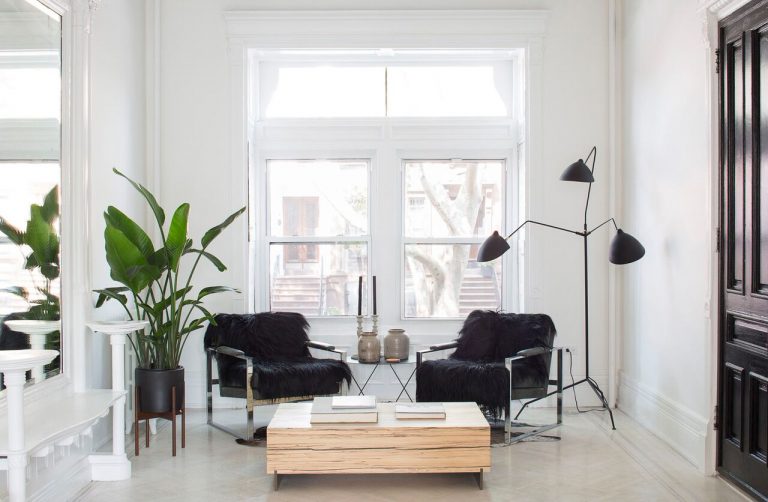 Above: A sitting area with a pair of Milo Baughman chairs covered in Black Icelandic Sheepskins, an Eric Trine Octahedron Side Table, a block coffee table by Eric Slayton, and a Serge Mouille Three-Arm Floor Lamp. 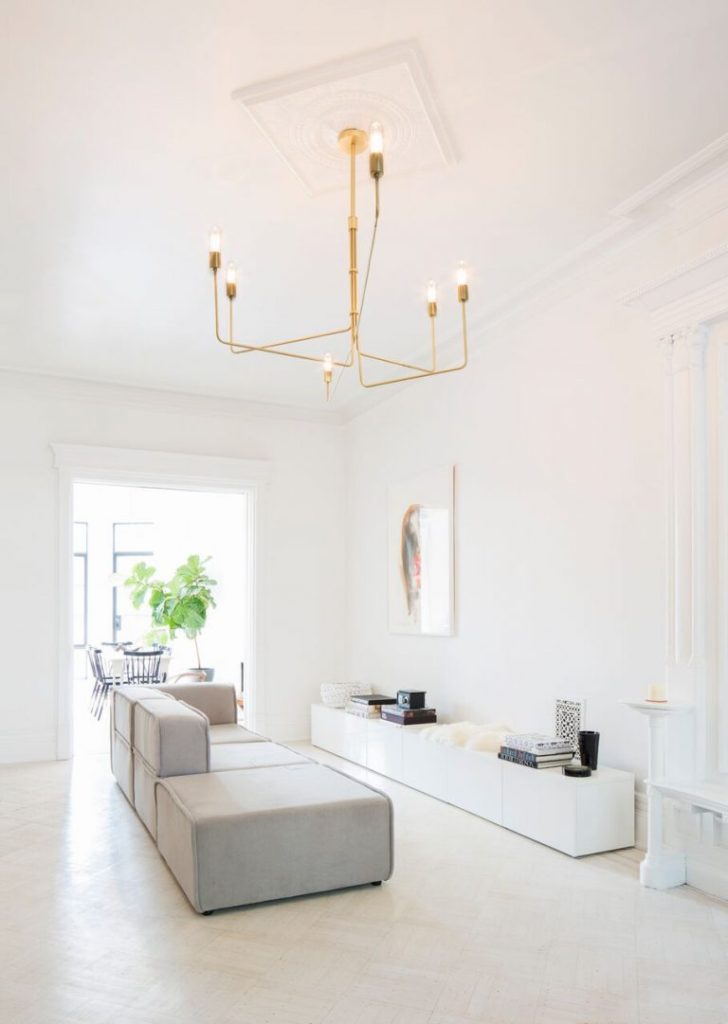 Above: The sofa is BoConcept’s customizable Carmo Sofa. The chandelier is by LA-based artist Gary Chapman. 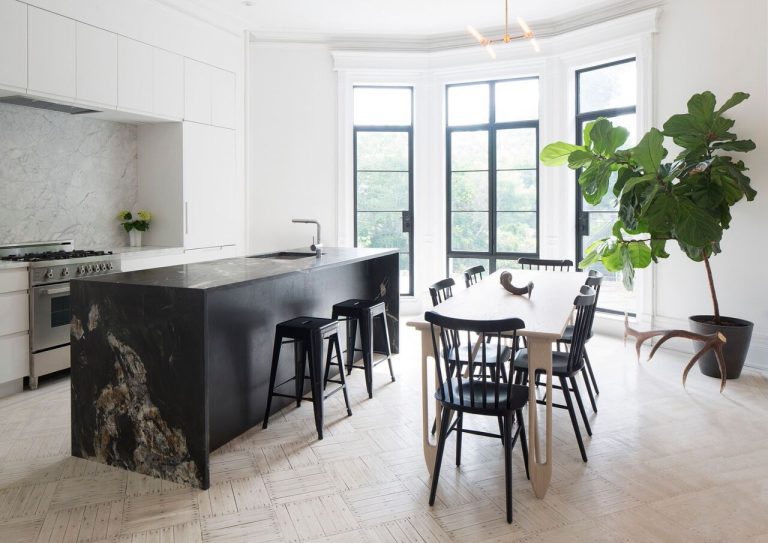 Above: The kitchen was gutted for a modern wall of Dunsmuir Cabinet fronts and Carrara marble backsplash. It includes a Bertazzoni range, fully integrated Liebherr fridge, and dishwasher behind a custom panel in the kitchen island. About the windows and doors, Jason says, “we had been thinking about the steel windows and doors for a while. Jeff saw someone building a commercial storefront and asked for their info, and that’s who we ended up using.” 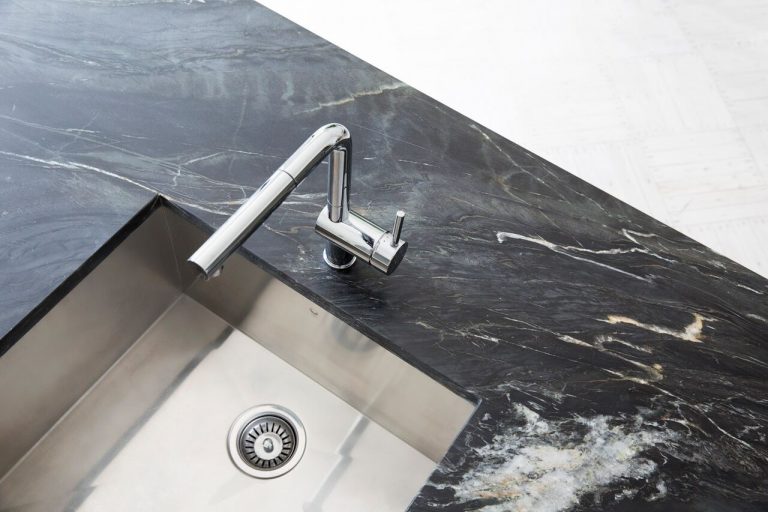 Above: Jeff and Jason first priced out a piece of black marble for the waterfall kitchen island but decided to avoid black marble due to acid staining. After looking around, they discovered the matte black quartzite from ABC Worldwide Stone: “super-low maintenance, super-high drama—in all the best ways!”, they say. The faucet is the Blanco Linus Pullout Kitchen Faucet. A review on it can be found on Armchair Empire. 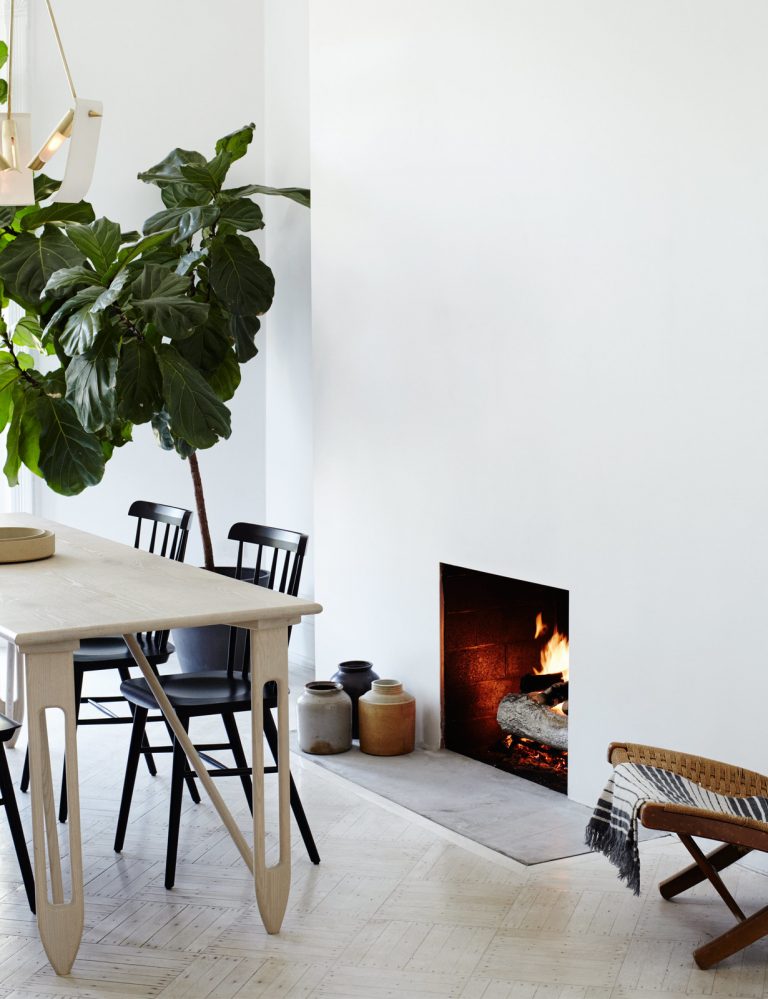 Above: The ornamental fireplace mantel was removed for a more minimal look. The Etoile Dining Table and Tsuru Flush Mount III light are both by Materia Designs, friends of Jeff and Jason. The chairs are Tom Kelley’s Salt Chair from Design Within Reach. Photograph courtesy of Pippa Drummond from A Fashionable Couple Remake Their Brooklyn Brownstone with a Sartorial Twist via Dwell. 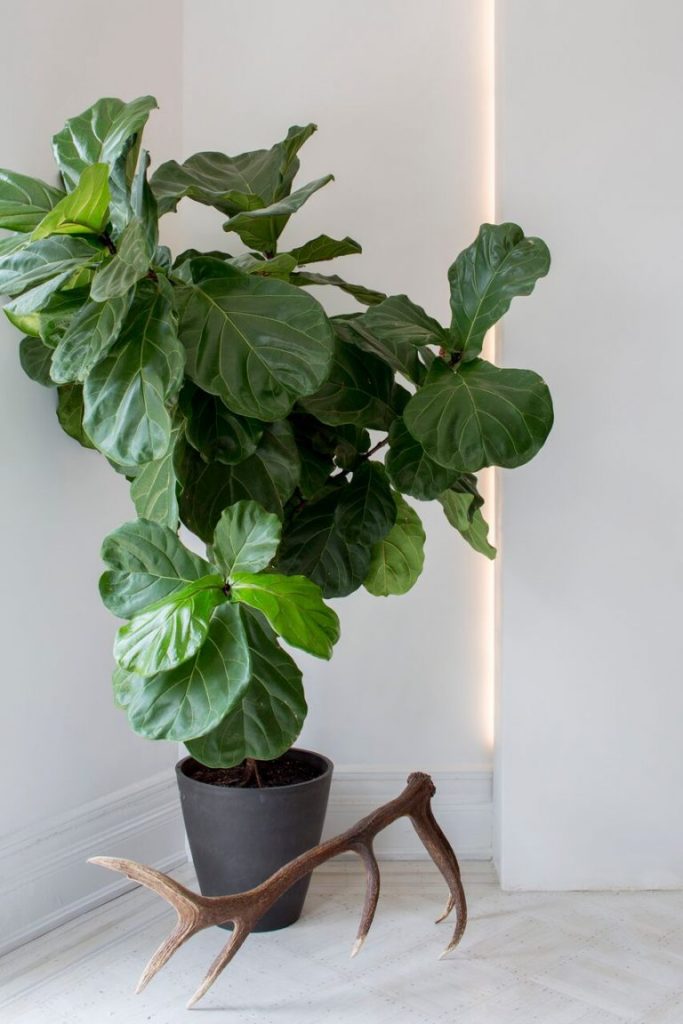 Above: Backlighting on the fireplace wall: “Where the drywall would have been run all the back flush to the wall, we just left it shy about two inches and then installed a strip of LED on the back side of it,” Jason explains. 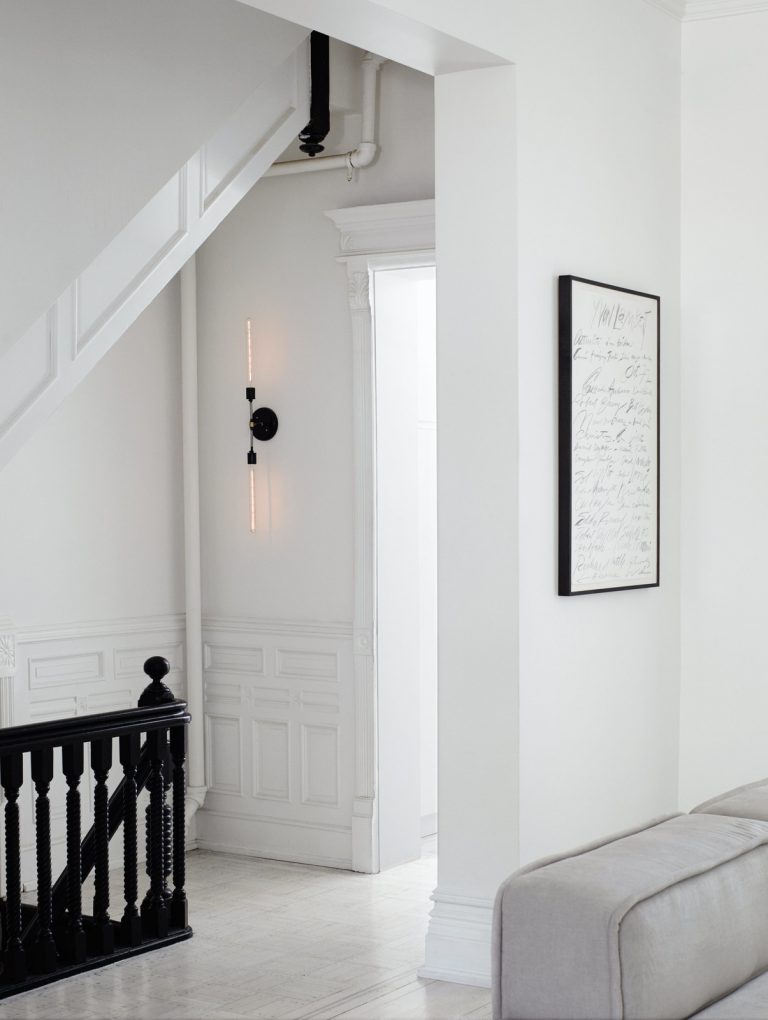 Above: A Cy Twombly exhibition print bought in Paris, a sconce in the hallway designed by Jeff and Jason, and banister painted in high-gloss black. Photograph courtesy of Pippa Drummond from A Fashionable Couple Remake Their Brooklyn Brownstone with a Sartorial Twist via Dwell. 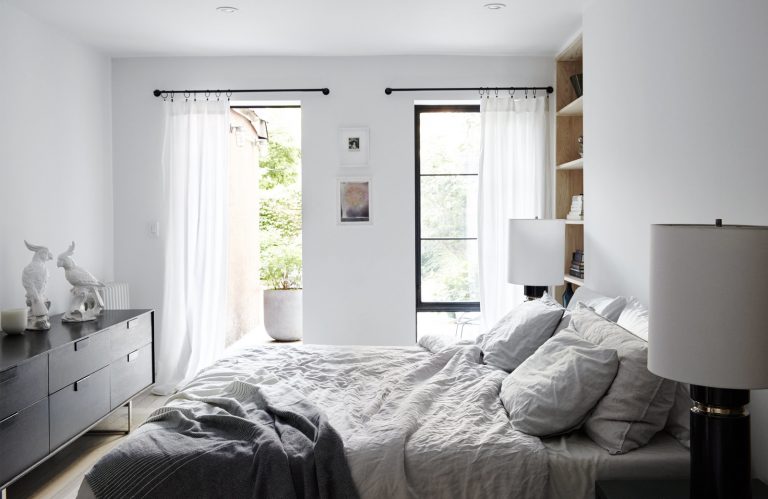 Above: The garden floor bedroom has built-in shelving by Wood Management, a Series 116 Drawer Console from Blu Dot in Smoke, and bed from West Elm. Photograph courtesy of Pippa Drummondfrom A Fashionable Couple Remake Their Brooklyn Brownstone with a Sartorial Twist via Dwell. 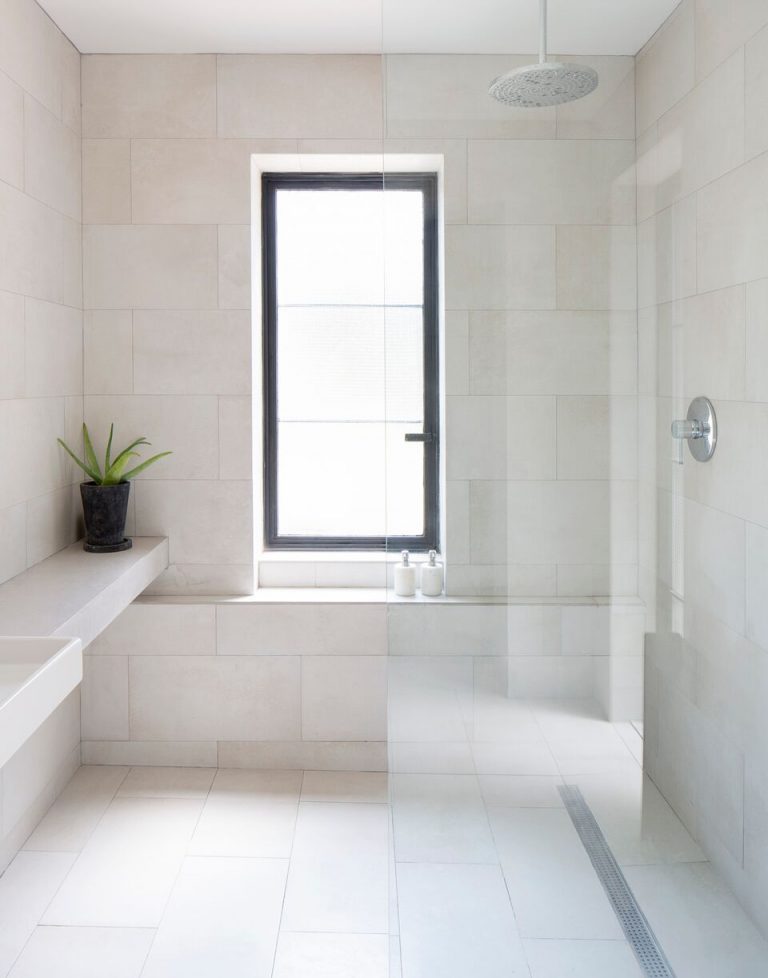 Above: The bathroom is finished in 12-by-24-inch irregular stone tile that Jeff and Jason matched to the plaster shower shelf they designed and had built by a contractor sourced from Remodelista. 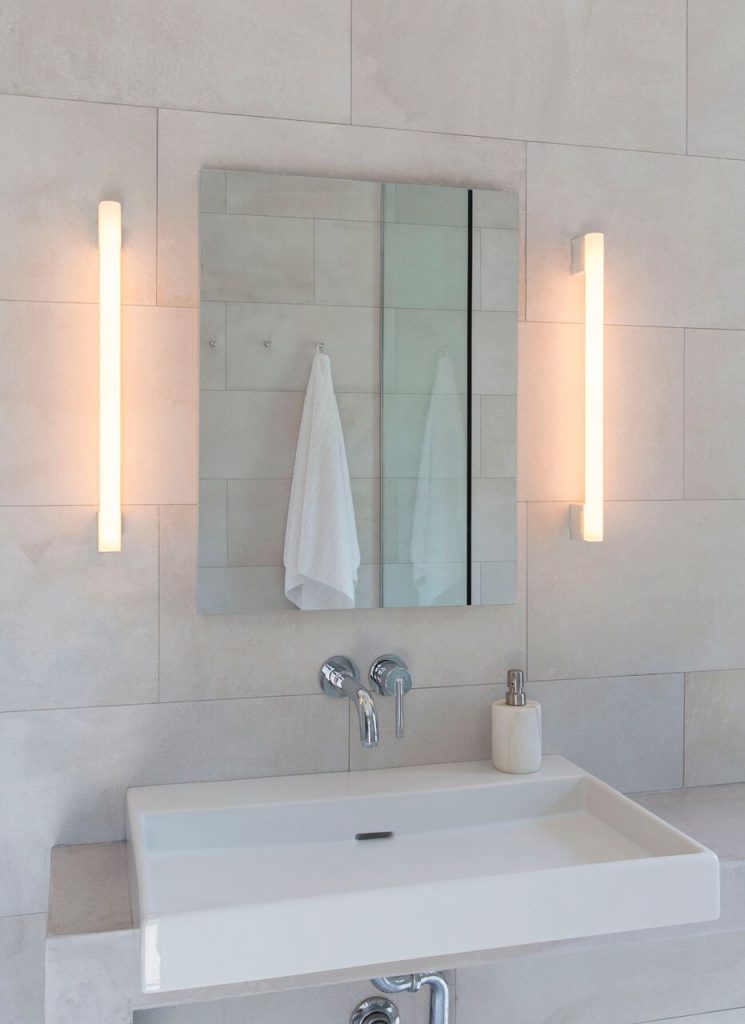 Above: The basin faucet is the Atrio Wall-Mounted Faucet by Grohe; the bath’s rain shower is also from Grohe.

Jeff Madalena and Jason Gnewikow are two of four friends who cofounded the Graham & Co. in upstate New York. See our post on the hotel: A New Catskills Getaway, Croquet Included.

One thought on “Gothic Design Takes Over Brooklyn”